Tallahassee Zip Code 32308 – What To Know Before Moving

The Tallahassee zip code of 32308 is triangle-shaped and located south of I-10, east of Thomasville Road. Also, the south boundary runs near Mahan Road east to I-10.  Mahan is also known as 90 or Route 90. Homes range from the walkable area around Capital Circle and Mahan for the Evening Rose community to the upscale and affluent neighborhood of Betton Hills. Tallahassee’s 32308 zip code is in the Tallahassee Board of Realtor’s northeastern area of the MLS.

Buyers want to know what an area is like before they make a purchase. There’s always one in every neighborhood, right? People want to know who they will be living near and how their neighbors spend their time and money. Because of this, we have informative reports for you! You can download both the Trade Area Report and the Neighborhood Report below for free. Check out more details below.

Who lives in Tallahassee’s 32308-zipcode?

According to Esri, the people living in this area are a mix of lifestyle groups from Affluent Estates, Middle Ground, and Midtown Singles. The trade report is based on data collected by Esri. They take MASSIVE amounts of data and group populations with similar interests, spending habits, and lifestyles. They grouped Tallahassee’s zip code 32308 data into five consumer segments within the above lifestyle groups. We have detailed two consumer segments below. These two groups make up about 18% of the population in Tallahassee’s 32308 zip code.  By the way, you will find these groups called Tapestry Segments in the report. 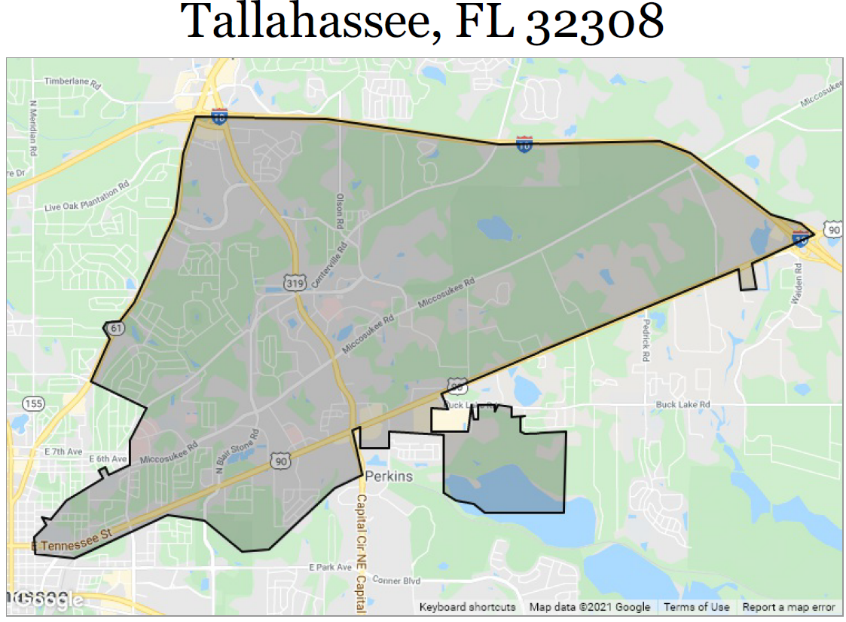 The biggest consumer groups in the 32308-zipcode are:

Most of the residents in Tallahassee’s 32308 zip code are employed in professional careers. Most have at least a bachelor’s degree and own their own home. The median ages for the group above vary significantly. For example, the biggest group has a median age of 37.4 years old. The smallest group has a median age of 69.8 years. In Tallahassee’s 32308 zip code, the median home values range from $208k to $481K for the biggest consumer groups.

First, the biggest group is called the Exurbanites segment. Also, this group includes approximately 20.1% of the population or 2,152 households. This group’s median age is 52.1 with a median household income of $112,200. The median net worth is approximately $688,100 and their median home value is $481,100. The residents are approaching retirement, but not slowing down.  They are generous with their time and money to charities and causes they love. This is also a group that supports the arts and local public radio. Exurbanites are foodies, preferring natural ingredients.  Their neighborhoods are established with large, maintained yards.

Next, the second biggest group is the Old and Newcomers residents. This group is 18.6% of the population included in the Tallahassee 32308 zip code. That includes 1,987 households. Also, this group’s median age is 40.1 with a median household income of $51,200. This group is nearing retirement and still has a high rate of labor force participation. As consumers, they clip coupons and are cost-aware. These residents foster a strong sense of community through volunteering, fundraising, and recycling.

Curious about those last three groups? If so, download a free report here: Trade Area Report for Tallahassee’s 32308 zip code.

Here’s the thing, in the next several paragraphs we are going to break down a lot of numbers about the population living in Tallahassee’s 32308 zip code. These graphs are going to show you the median household incomes, job categories, and education level of the population. Also, we will show you the age distributions of children and adults.  We have information on schools zoned for the 32308 zip code and a link to the school grade reports for public elementary, middle, and high schools at the bottom of the page.

Of the children under the age of 18 years old living in the 32308 zip code, the two biggest populations show you that there are a lot of young children in this zip code. Over 86% of the residents have a commute time of fewer than 30 minutes to work. Around 4.3% work from home.

This area has a higher level of education among residents compared to other zip codes. Almost a third of residents of Tallahassee’s 32308 zip code has at least a college education (29.4%). Twenty-two percent of the population has a graduate or professional degree. For Tallahassee, that number is 20%. Likewise, in Florida, approximately 11% have degrees beyond a bachelor’s compared to 12.4% in the USA. 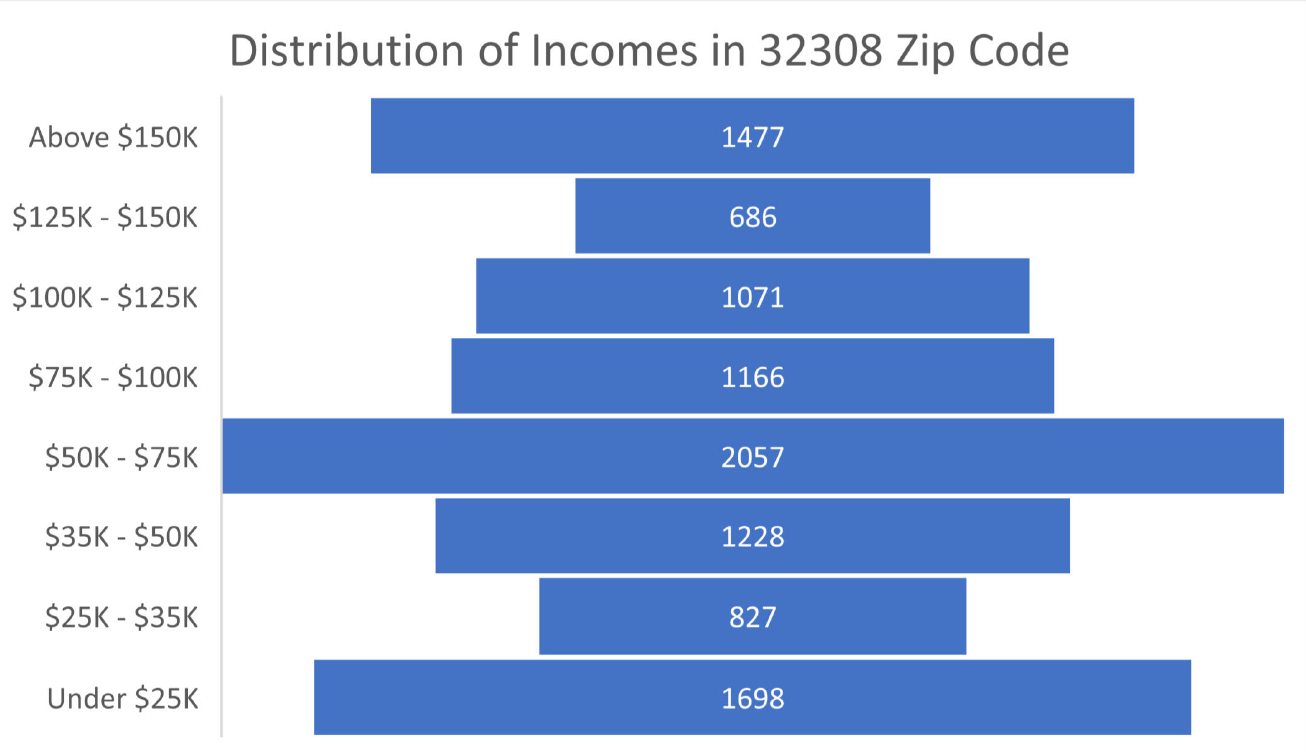 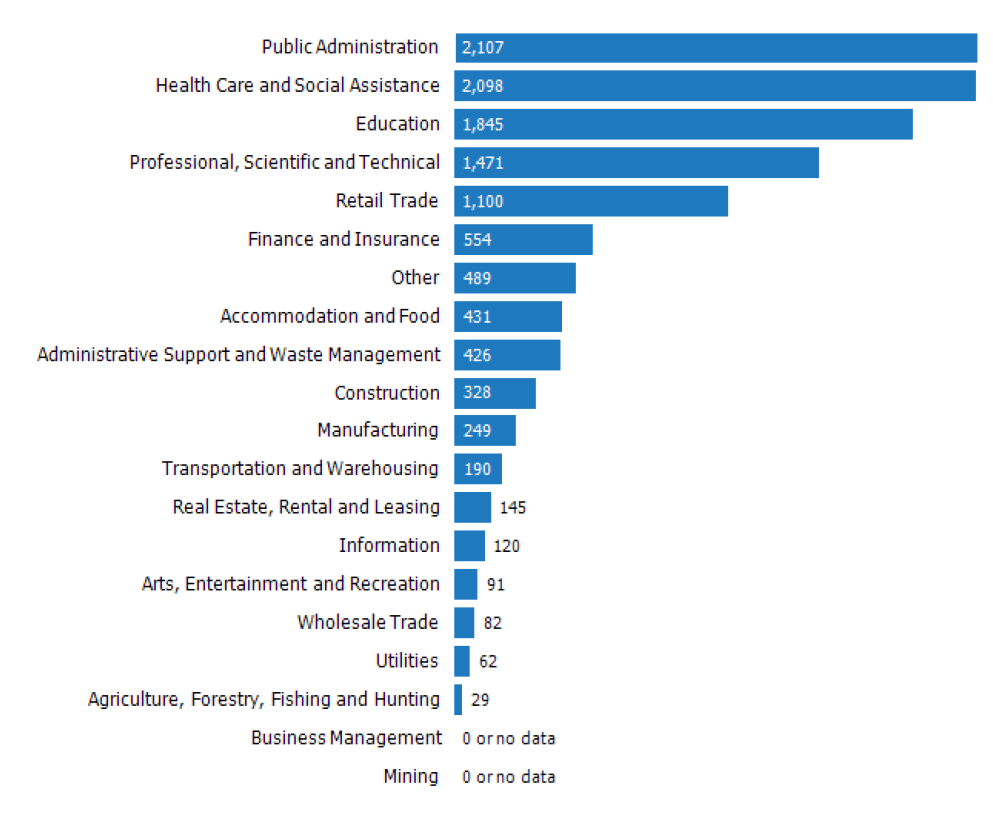 Walkability scores are based on a scale from 1 to 100. The higher the number, the shorter the walk to the needed amenities. Even though there are walkable areas, this zip code is widely residential. Most of the homes are not within walking distance of amenities. The walkability score for Tallahassee’s 32308 zip code is 2.3. If you have read other pages, you know that makes this zip code has one of the highest walkability scores. The score is still low. And this means that everything will require a vehicle and there are few sidewalks and parks for walking.

The charts below do not include every single school zoned for this zip code, only the most commonly zoned schools. Check what schools your potential residence is zoned for here: Leon County School Zones

Most homes in the Tallahassee 32308 zip code will be zoned for:

Most homes in the 32308 zip code will be zoned for one of the following middle schools:

If you want more information about Middle Schools, click here. You can look up your address for middle schools here.

Most homes in Tallahassee’s 32308 zip code will be zoned for one of the following high schools:

You can read more information about High Schools here. You can look to see what high school you are zoned for here.

Leon County operates the Miccosukee Greenway and Pedrick Park.  The City of Tallahassee maintains Betton Nature Preserve, Oven Park, Governors Park, and McCord Park.  Check back soon for photos.  I have a ton of photos of many of these parks. They need to be formatted for the best visual appeal! Stay tuned!

This area has a fairly low AARP Livability at 53. Furthermore, the highest score is for clean air and water.  The lowest score is for Health characteristics or access to health care, prevention, and quality care. The AARP Livability score was developed using survey data from adults over 50 years of age. They used this data to determine general preferences for community living. These included the preferences for physical ability, driving status, race, and housing amenities among many others. The livability scores range from 0 to 100. Find more information on their website here.

This Tallahassee zip code had a modest estimated population increase since 2010. The population density is low, and you will find large yards and generously sized homes. This zip code has seen a significant increase in home values.  The median sold price was $260,000 in 2019. However, the first five months of 2022 have sold at a median home value of $360,000.

Only 55% of the residents in Tallahassee’s 32308 zip code own their own homes. That means there are a lot of rental homes in this area. The 32308 zip code has a median house age of 38 years old. There is new construction in established residential areas, but the biggest new construction is going on in Canopy.  There are only a few neighborhoods in Tallahassee with Community Development Fees in addition to homeowners’ association dues. This neighborhood is one of them. Southwood is another.

Homes average about 53 days on the market before they are sold. This is nine days longer than the average days on market for 2021. Last year, homes spent an average of 44 days on the market. The Tallahassee zip code of 32308 had 351 sales of single-family homes in 2021.

So far this year, thirty-three townhomes sold in the 32308 zip code. There was one mobile home sale within this area. In the 32308 zip code, the homes sold average of 2,099 square feet, and 12% of homes are sold with pools. This is one of the largest percentages in Tallahassee.

Some neighborhoods in the 32308 zip code have a handful of homes built in the early 1800s.  However, you will find plenty of newly constructed single-family homes each year as well. The average yard size was over a third of an acre at .36 acres. The lowest sold price in 2022 so far, was $125,000 for a home in Kipwood.