Tallahassee Zip Code 32305 – What To Know Before Moving

The Tallahassee zip code of 32305 is south of the Capitol Complex and downtown Tallahassee.  Tallahassee’s 32305 zip code includes the only other incorporated city in Leon County- Woodville. This area is in the Tallahassee Board of Realtor’s southern area of the MLS.

Buyers want to know what an area is like before they make a purchase. Are there mobile homes in the neighborhood? Do parents consider the schools good? Are the locals nice? There’s always one in every neighborhood, right? People want to know who they will be living near and how their neighbors spend their time and money. Because of this, we have informative reports for you! You can download both the Trade Area Report and the Neighborhood Report below for free. Check out more details below.

According to Esri, the people living in this area love country life and small-town living. The trade report is based on data collected by Esri. They take MASSIVE amounts of data and group populations with similar interests, spending habits, and lifestyles. They grouped Tallahassee’s zip code 32305 data into five consumer segments within three lifestyle groups. We have detailed two consumer segments below. These two groups make up about 68% of the population in Tallahassee’s 32305 zip code.  By the way, you will find these groups called Tapestry Segments in the report.

The biggest consumer groups in the 32305-zipcode are:

Most of the residents in Tallahassee’s 32305 zip code are employed in service or professional careers. Most have a high school diploma and own their own home. The median ages for the group above vary around 30 years of age. For example, the biggest group has a median age of 35.7 years old. The smallest group has a median age of 29.7 years. In Tallahassee’s 32305 zip code, the median home values range from $99k to $192K for the five biggest consumer groups.

First, the biggest group is called the Down the Road segment. Also, this group includes approximately 46.4% of the population or 3,624 households. This group’s median age is 35.7 with a median household income of $44,800. The median net worth is approximately $77,300 and their median home value is $139,400. The residents are young families who value their traditions. Many of the workers in this zip code work in retail trade or other service industries or construction, agricultures and other types of industrial jobs. Nearly two-thirds own their home, and most are married couples.  This group is also enjoys hunting and fishing.

Next, the second biggest group is the Southern Satellites residents. This group is 21.7% of the population included in the Tallahassee 32305 zip code. That includes 1,698 households. Also, this group’s median age is 41 with a median household income of $54,800. This group is typically slightly older and more settled couples who own their homes.  They are employed in various trades. This group enjoys living in the country and doing their own home improvement projects.

Here’s the thing, in the next several paragraphs we are going to break down a lot of numbers about the population living in Tallahassee’s 32305 zip code. These graphs are going to show you the median household incomes, job categories, and education level of the population. Also, we will show you the age distributions of children and adults.  We have information on schools zoned for the 32305 zip code and a link to the school grade reports for public elementary, middle, and high schools at the bottom of the page. 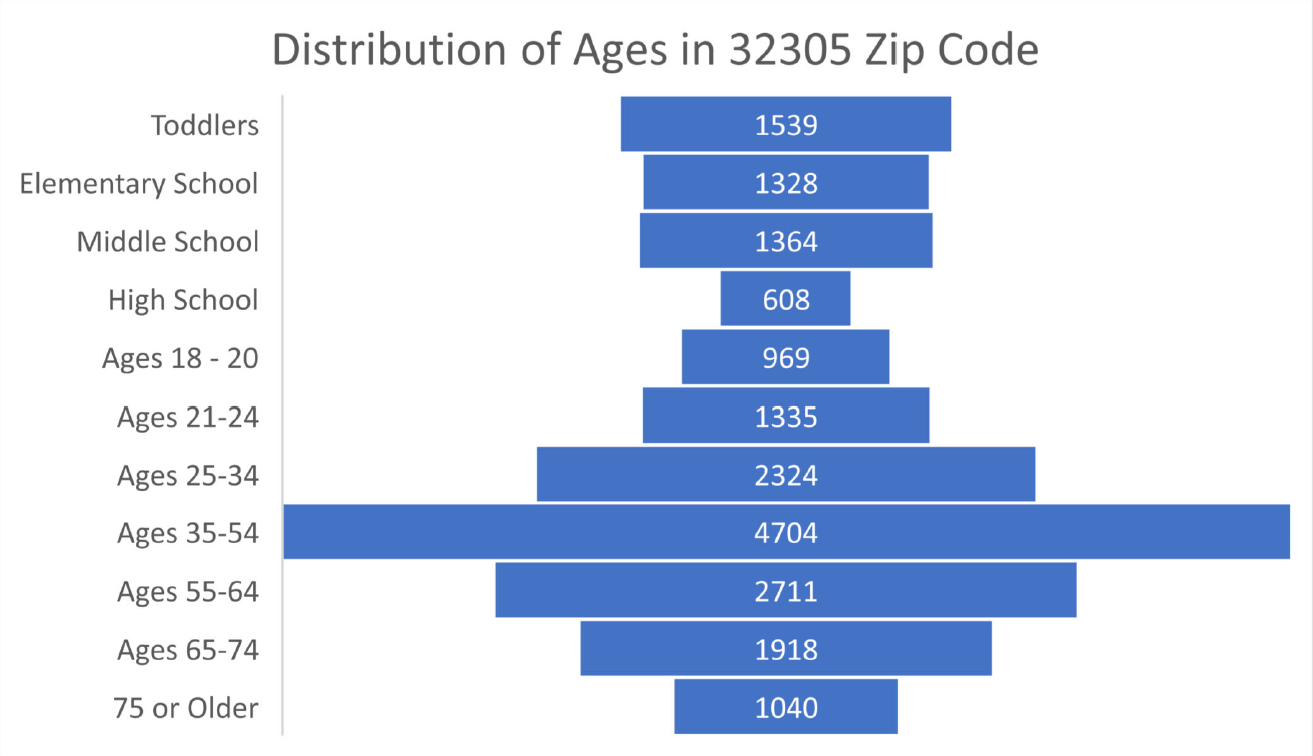 Of the children under the age of 18 years old living in the 32305 zip code, the biggest population is toddlers. This zip code has a lot of young kids living here. Almost 60% of the residents have a commute time of 30 minutes or less to work. Around 4.31.6% work from home. For the record, this is the lowest percentage in Tallahassee.

This area has a lower level of education among residents compared to other zip codes. Only 8.1% of residents of Tallahassee’s 32305 zip code have a graduate or professional degree. Thirteen percent of the population has a bachelor’s degree. For Tallahassee, that number is 26%. Likewise, for Florida, approximately 19% have degrees beyond a bachelor’s compared to 20% of the USA. 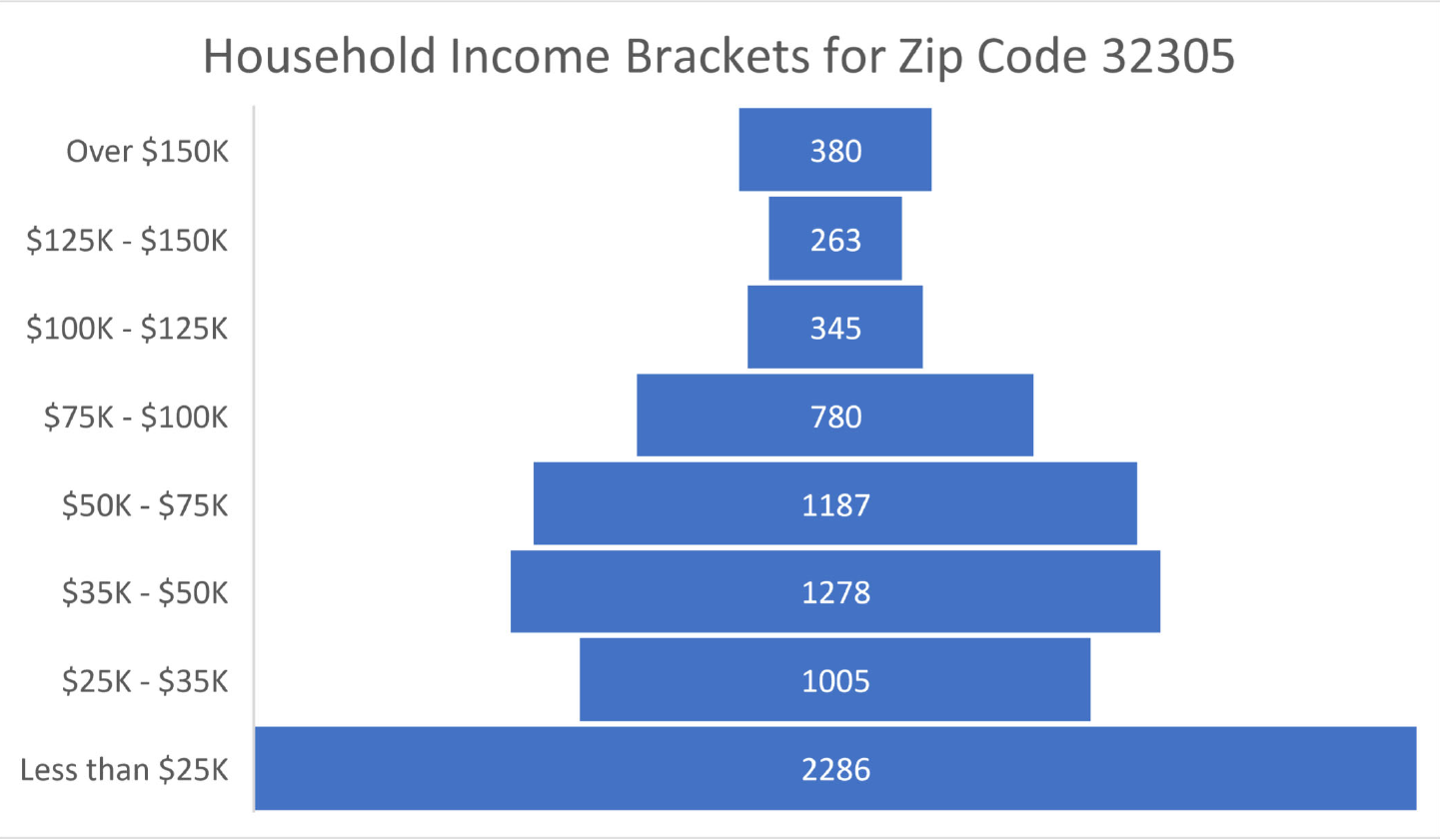 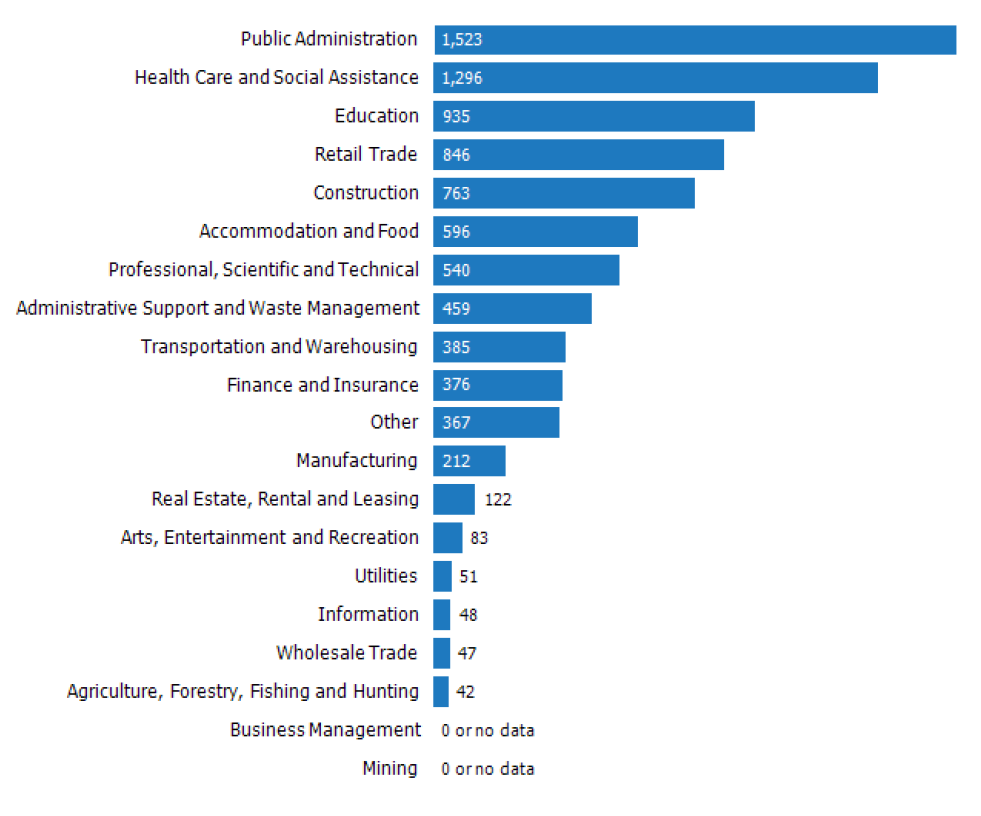 This area is a Tallahassee rural area. There are a handful of areas near downtown Woodville that is within walking distance to amenities. Most residential areas; however, are quiet and tucked off country roads with few sidewalks or stores within walking distance. Tallahassee’s zip code 32305 has the lowest population densities and one of the lowest walkability scores.

The charts below do not include every single school zoned for this zip code, only the most commonly zoned schools. Check what schools your potential residence is zoned for here: Leon County School Zones.

Most homes in the Tallahassee 32305 zip code will be zoned for:

Interested in more school details? Here, you can read more information here: Elementary School’s scores for Tallahassee. You can look up your elementary school zone here.

Most homes in the 32305 zip code will be zoned for one of the following middle schools:

Here you can read more information here: Middle School’s scores for Tallahassee, click here. You can look up your address for middle schools here.

Most homes in Tallahassee’s 32305 zip code will be zone for one of the following high schools:

You can read more information here: High School’s scores for Tallahassee. You can look to see what high school you are zoned for here.

Leon County operates the Anita Davis Preserve at Lake Henrietta and Gil Waters Preserve at Lake Munson.  The City of Tallahassee maintains Jake Gaither Golf Course.  Check back soon for photos.  My husband loves to golf and we have photos! They need to be formatted for the best visual appeal, though! Please check back!

This area has a fairly low AARP Livability at 52. Furthermore, its highest score is for clean air and water. Tallahassee has great tap water! The lowest score is for Health characteristics or access to health care, prevention, and quality care. The second-lowest score is for neighborhood characteristics. Lack of access to life, work, and play amenities has brought this zip code’s score down. The AARP Livability score was developed using survey data from adults over 50 years of age. They used this data to determine general preferences for community living. These included the preferences for physical ability, driving status, race, and housing amenities among many others. The livability scores range from 0 to 100. Find more information on their website here.

This Tallahassee zip code had a modest estimated population increase since 2010. The population density is the lowest in Tallahassee. The median sold price for this neighborhood is among the lowest in Tallahassee.  Even so, this zip code has seen a significant increase in home values.  The median sold price was $146,260 in 2019. However, the first five months of 2022 has sold a median home value of $180,250.

Only 5562% of the residents in Tallahassee’s 32305 zip code own their own homes. That means there are a lot of rental homes in this area. The 32305 zip code has a median house age of 39 years old. There is new construction in established residential areas, but no big new subdivisions are going in soon.

Some neighborhoods in the 32305 zip code have a handful of homes built in the early 1930s.  However, you will find newly constructed single-family homes each year as well. The most common construction year of the homes sold this year was 2006. This means that most homes sold this year were around 15 years old. The average yard size was over two-thirds of an acre at .69 acres. So far, the lowest sold price in 2022 was $35,000 for a home in Alameda Heights.

Want to Know - Is Tallahassee A Good Place To Live?

Ask Us Any Question.

We love it, but Tallahassee isn't paradise for everyone.