Tallahassee Zip Code 32303 – What To Know Before Moving

The Tallahassee zip code of 32303 is northwest of the Capitol Complex and downtown Tallahassee.  The area in Tallahassee’s 32303 zip code runs along Rt 27, or N Monroe street past I10 and towards Gadsden. It includes many of areas north of the universities with many walkable neighborhoods and rural areas. This area is in the Tallahassee Board of Realtor’s northwestern area of the MLS.

Buyers want to know what an area is like before they make a purchase. Are there mobile homes in the neighborhood? Do the residential areas have trails and greenspace? What are the prices of homes? Are the schools considered good by other parents? Would I fit in with the locals and are they nice? Do they party all night and park by braille? People want to know who they will be living near and how their neighbors spend their time and money. Because of this, we have informative reports for you! You can download both the Trade Area Report and the Neighborhood Report below for free. Check out more details below and download a copy for yourself.

According to Esri, the people living in this are a diverse mix of young and living in multi-unit rentals and homeowning Millennials. The trade report is based on data collected by Esri. They take MASSIVE amounts of data and group populations with similar interests, spending habits, and lifestyles. They grouped Tallahassee’s zip code 32303 data into five consumer segments within four lifestyle groups. We have detailed two consumer segments below. These two groups make up about 43% of the population in Tallahassee’s 32303 zip code.  By the way, you will find these groups called Tapestry Segments in the report. 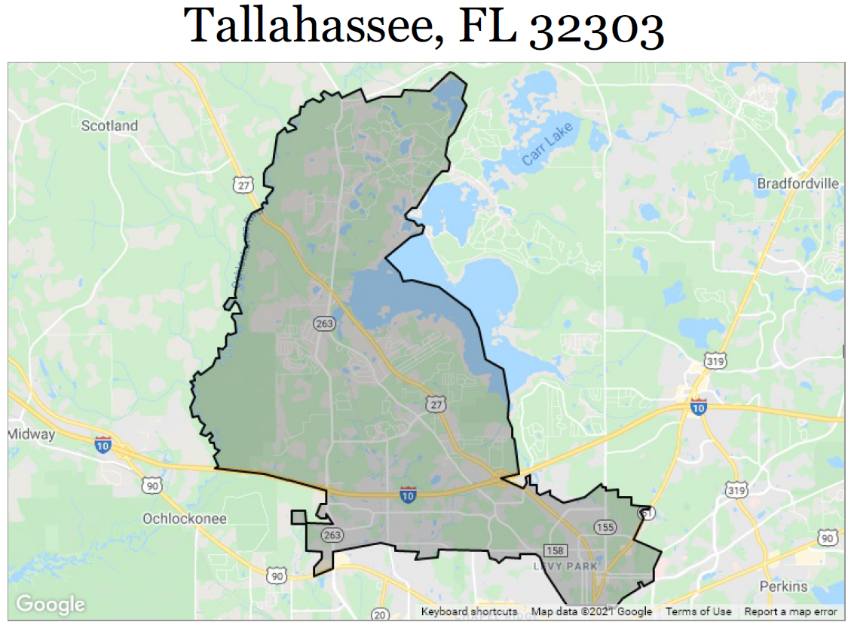 The biggest consumer groups in the 32303-zipcode are:

Most of the residents in Tallahassee’s 32303 zip code are employed in service or professional careers. Most have a bachelor’s degree or at least some college without the degree. These residents grew up using technology from a young age. The median ages for the group above vary from 25 to 39 years of age. The 32303-zip code had the highest number of condos (70), townhouses (113), and single-family homes (352) this year between January and the end of May than any other Tallahassee zip code.

Next, the second biggest group is the College Towns residents. This group is 27.4% of the population included in the Tallahassee 32303 zip code. That includes 5,804 households. Also, this group’s median age is 24.7, the youngest group in this zip code. Their median household income of $40,000. This group has a limited income and must make thrifty purchases.  They are highly connected and use the internet for all aspects of their lives. These residents are looking for new experiences and they seek out adventure.

Next, the second biggest group is the Bright Young Professionals residents. This group is 15.9% of the population included in the Tallahassee 32303 zip code. That includes 3,374 households. Also, this group’s median age is 33.8, slightly older than the group above. Their median household income of $61,000. This group has student loans and a retirement account. They own newer cars and about 43% own their own homes. These households are primarily couples, some married. They attend bars and clubs to enjoy local music and to the beach to relax.  The residents are also outdoorsy, enjoying a variety of sports and outdoor activities. They also enjoy eating at trendy restaurants.

Curious about those last three groups: Home Improvement, Young and Restless, and Old and Newcomers? If so, download a free report here: Trade Area Report for Tallahassee’s 32303 zip code.

Here’s the thing, in the next several paragraphs we are going to break down a lot of numbers about the population living in Tallahassee’s 32303 zip code. These graphs are going to show you the median household incomes, job categories, and education level of the population. Also, we will show you the age distributions of children and adults.  We have information on schools zoned for the 32303 zip code and a link to the school grade reports for public elementary, middle, and high schools at the bottom of the page. 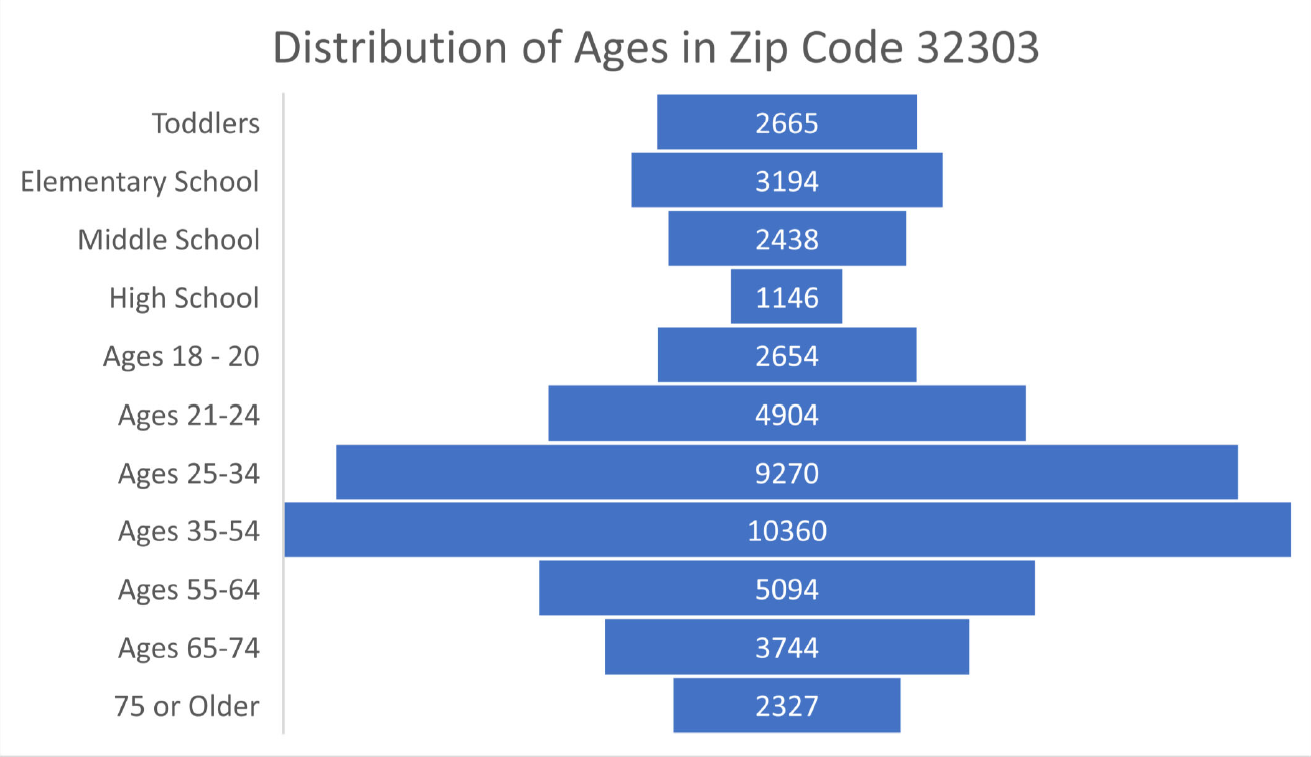 This area is north of Tallahassee’s college life. While there are still many apartment complexes and multi-family households, it also has the highest number of residential sales than any other zip code. It has many subdivisions tucked off North Monroe Street. This area is busy with morning and early evening commutes. That means, that accidents regularly happen on N Monroe Street. (For the love of your vehicle and safety, watch the turn light at Lakeshore and Monroe!)

Of the children under the age of 18 years old living in the 32303 zip code, they are mostly toddlers and elementary school ages.  There are relatively few high school-age children in this zip code..

Approximately 31% of the population’s households earn more than $75,000 a year.

This area has a higher level of education among residents considering how young the population averages. Almost sixteen percent of residents of Tallahassee’s 32303 zip code have a graduate or professional degree. Almost 41% of the population has at least some college education. 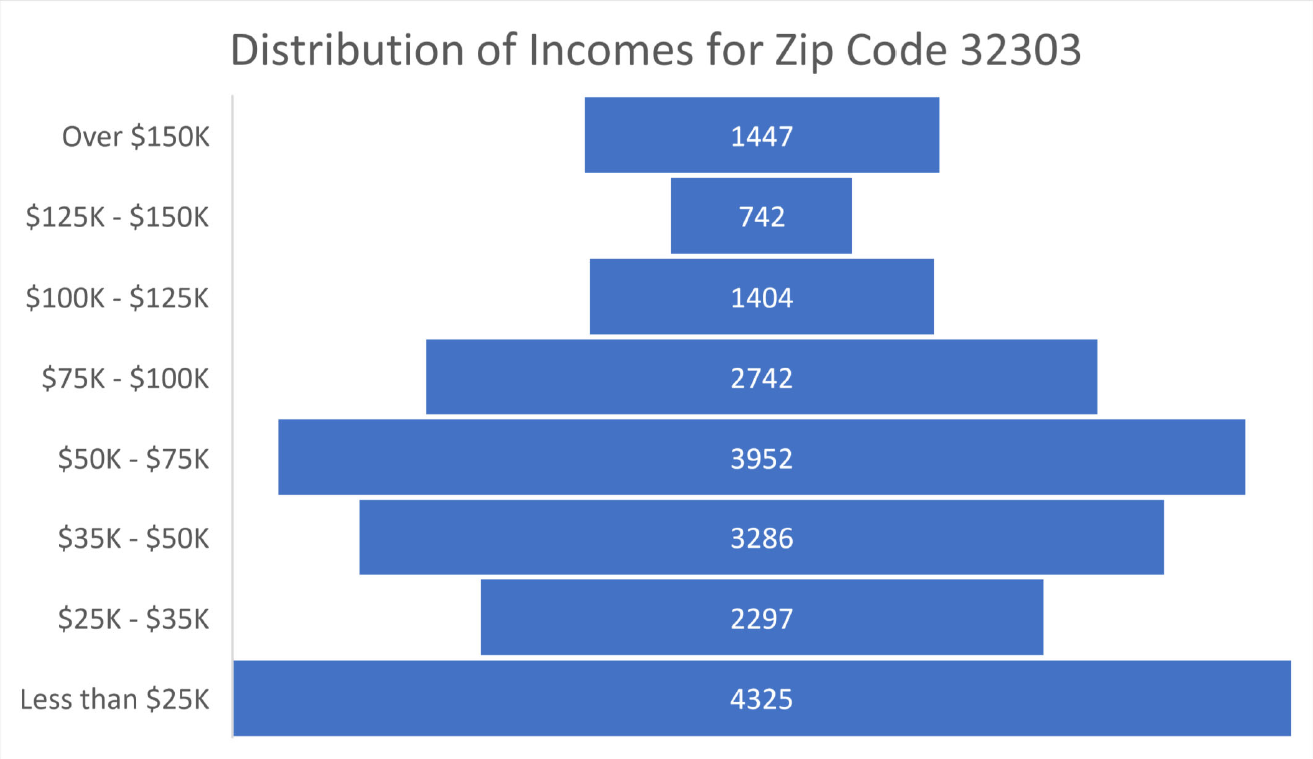 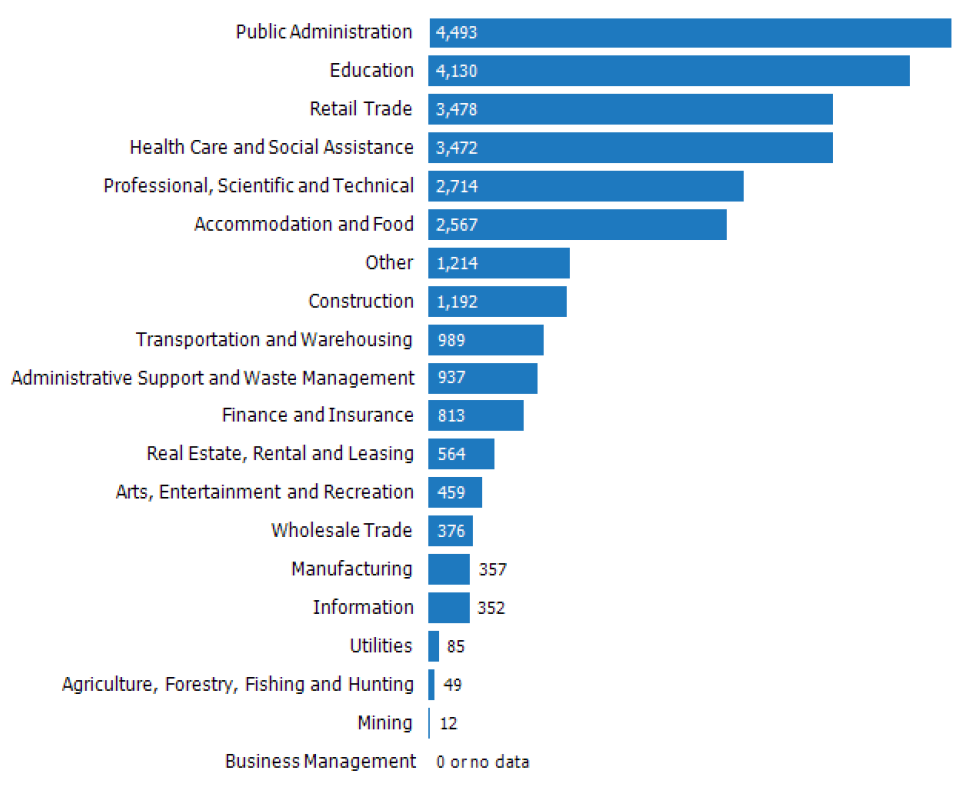 Given the proximity to the many students and state employment opportunities, it makes sense that the most common occupational category is in the public administration career group. This is followed by the education group. Next is the retail trade occupational category.

This zip code has the HIGHEST walkability score than any other zip code in Tallahassee. Walkability scores are based on a scale from 1 to 100. The higher the number, the shorter the walk to needed amenities. Even though there are walkable areas, this zip code still lacks public transportation options. Most of the homes are not within walking distance of amenities. The walkability score for Tallahassee’s 32303 zip code is a respectable 2.5(compared to the other zip codes). Unfortunately, this still means that virtually everything will require a vehicle but there are sidewalks on most of the streets.

The charts below do not include every single school zoned for this zip code, only the most commonly zoned schools. Check what schools your potential residence is zoned for here: Leon County School Zones.

Most homes in the Tallahassee 32303 zip code will be zoned for:

Most homes in the 32303 zip code will be zoned for one of the following middle schools:

If you want more information about Middle Schools, click here.

You can look up your address here to see what middle school you are zoned for in Tallahassee.

Most homes in Tallahassee’s 32303 zip code will be zone for one of the following high schools:

You can read more information about Tallahassee High Schools here on our webpage. Download the free reports that include useful information. You can look to see what high school you are zoned for here.

These are all great parks and Lake Ella used to have Food Truck Thursdays. We keep advocating for its return – maybe after COVID. We have photos of many more of these fabulous parks! Please check back!

We loved taking our kids for walks around Lake Ella and have many fond memories of chasing ducks and petting friendly puppies.  It hasn’t changed much over the years and it is still great for lunchtime walks.

Nestled in Midtown, this park offers so much to do. The trails are mostly shaded with just the right amount of hills to keep your heart rate up!

This area has a fairly low AARP Livability at 53, but it is still one of the highest in Tallahassee. Furthermore, it’s highest score is for clean air and water. The lowest score is for health prevention, access, and quality of care. The AARP Livability score uses survey data from adults over 50 years of age. They used this data to determine general preferences for community living. These included the preferences for physical ability, driving status, race, housing amenities among many others. The livability scores range from 0 to 100. Find more information on their website here.

Approximately 52% of the residents in Tallahassee’s 32303 zip code own their own homes. That means there are a lot of multi-family rentals in this area. The 32303 zip code has a median house age of 41 years old. There is new construction in established residential areas.

The median estimated home value in the zip code is $209,000. Sales for the past two years have been higher than that value.  So far this year over 350 homes have sold at an average of 101% of the list price.  This zip code also has a lot of residences that are townhouses or condos.

Homes sell after about 40 days on the market. It takes an average of 45 days to close a mortgage. This average number tells me that there are a lot of cash buyers in this corner of Tallahassee. Makes sense with so many available renters. This time on the market is a little shorter than the average days on market for 2021. Last year, homes spent an average of 47 days on the market. The Tallahassee zip code of 32303 had 788 sales of single-family homes in 2021.

Many neighborhoods in the 32303 zip code have homes built in the early midcentury from the 1920s and 1930s.  However, you will find newly constructed single-family homes each year as well. The most common build year of the homes sold this year was 1985. This means, that most homes sold this year were around 50 years old. The average yard size was a little under half of an acre at .4 acres. The lowest sold price in 2022 so far, was $28,000.

If you are thinking about buying a home, we would love to be your real estate expert on call.  If you find this information helpful – please let me know by reaching out to us through the contact us page.  Thanks for your help!