Tallahassee Zip Code 32301 – What To Know Before Moving

The Tallahassee zip code of 32301 includes the Capitol Complex downtown north to Tennessee Street and south to Fairview Middle School.  The area in Tallahassee’s 32301 zip code runs along East Tennessee Street briefly and east to Capital Circle SE. It includes many of the trendiest restaurants, adult night life (as opposed to college night life), and boutique shopping in Tallahassee. Rumor has it this area is in every quadrant of the Tallahassee Board of Realtor’s MLS.

Buyers want to know what an area is like before they make a purchase. Are there mobile homes in the neighborhood? What are the prices of homes? Are the schools considered good by other parents? Would I fit in with the locals and are they nice? Do they party all night and park by braille? People want to know who they will be living near and how their neighbors spend their time and money. Because of this, we have informative reports for you! You can download both the Trade Area Report and the Neighborhood Report below for free. Check out more details below.

According to Esri, the people living in this are young and living in multi-unit rentals. These are students and recent graduates, y’all! The trade report is based on data collected by Esri. They take MASSIVE amounts of data and group populations with similar interests, spending habits, and lifestyles. They grouped Tallahassee’s zip code 32301 data into five consumer segments within three lifestyle groups. We have detailed two consumer segments below. These two groups make up about 56% of the population in Tallahassee’s 32301 zip code.  By the way, you will find these groups called Tapestry Segments in the report. 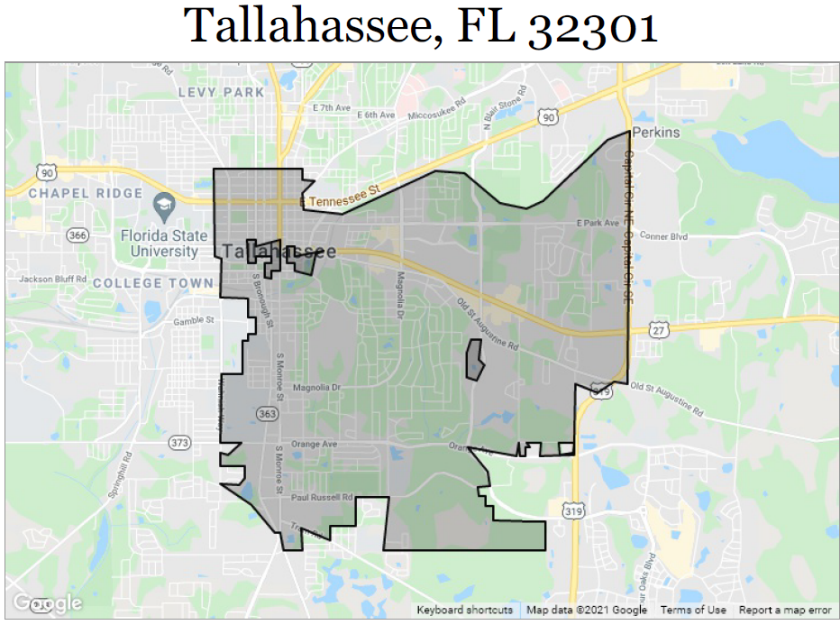 The biggest consumer groups in the 32301-zipcode are:

Most of the residents in Tallahassee’s 32301 zip code are employed in service or professional careers. Most have a bachelor’s degree and grew up using technology from a young age. The median ages for the group above vary from 29 to 40 years of age. Highest AARP Livability score, and some of the best city parks. The median age for the zip code is 30.5 years and there is a total estimated population of almost 31K residents.

First, the biggest group is called the Young and Restless segment. Also, this group includes approximately 38.9% of the population or 5,192 households. This group’s median age is 30.4 with a median household income of $49,500. The median net worth is approximately $13,900 and their homeownership rate is approximately 15%. These residents take public transportation and prefer to buy magazines about fashion, news and music.  They are more aware of price than brand loyalty. Almost one in five move every year and they are restless consumers.

Next, the second biggest group is the Emerald City residents. This group is 16.8% of the population included in the Tallahassee 32301 zip code. That includes 2,247 households. Also, this group’s median age is 38, slightly older than the group above. Their median household income is $73,000. The incomes of this group comes primarily from wages, investments, and self-employment. This group buys green products and cares about their carbon footprint. They also place huge importance on learning new things and emphasizing local cuisines.

Here’s the thing, in the next several paragraphs we are going to break down a lot of numbers about the population living in Tallahassee’s 32301 zip code. These graphs are going to show you the median household incomes, job categories, and education level of the population. Also, we will show you the age distributions of children and adults.  We have information on schools zoned for the 32301 zip code and a link to the school grade reports for public elementary, middle, and high schools at the bottom of the page. 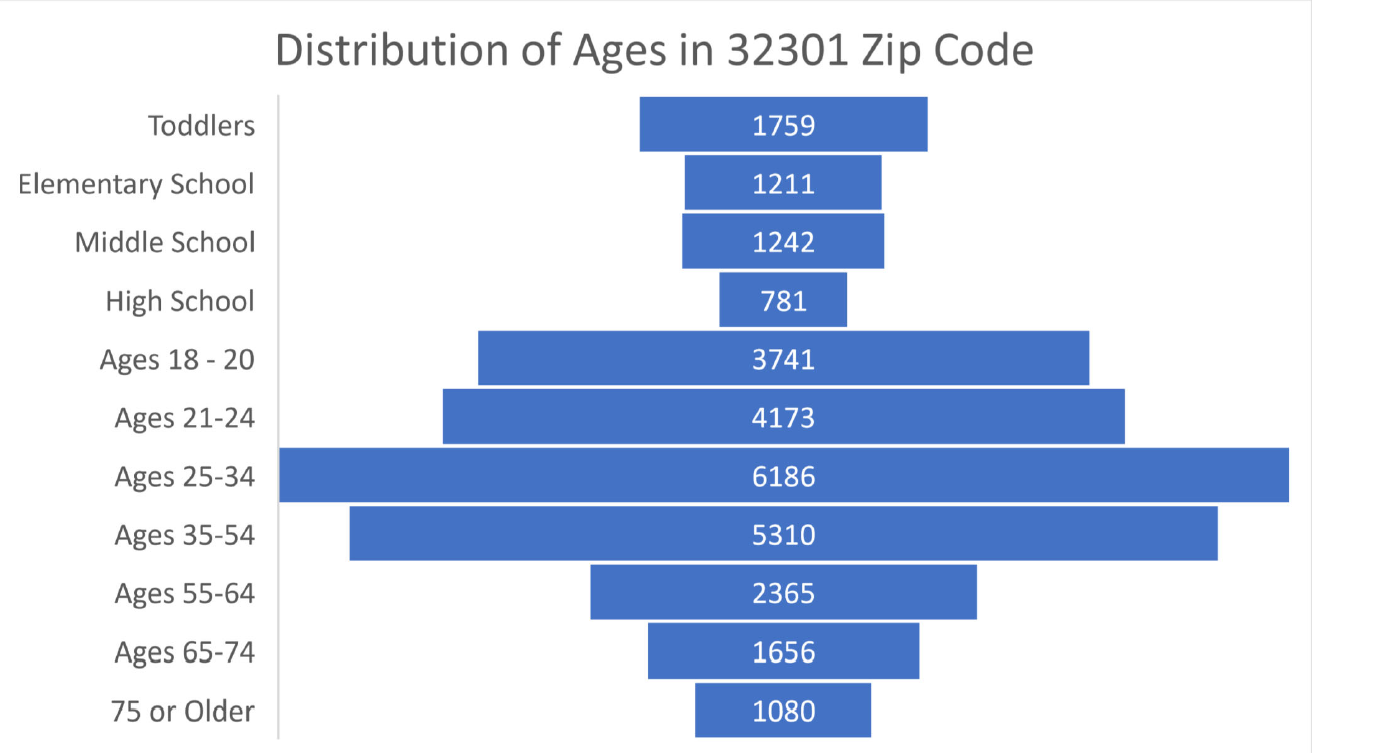 Tallahassee’s zip code 32301 is the most populated with 29.5K Tallahassee residents.  This zip code is also the second most densely populated at over 3,000 people per square mile. This area includes the downtown and Capitol Complex of Tallahassee. The population has grown 5.8% since 2010. In comparison, Tallahassee has grown 7.7%, Leon County has grown 8%, and Florida 15.6% since 2010.

Of the children under the age of 18 years old living in the 32301 zip code, the biggest population is toddlers.

Almost 88% of the residents have a commute time of 30 minutes or less to work. Around 5.3% work from home, which is about average for Tallahassee.

Approximately 22% of the households earn more than $75K a year. 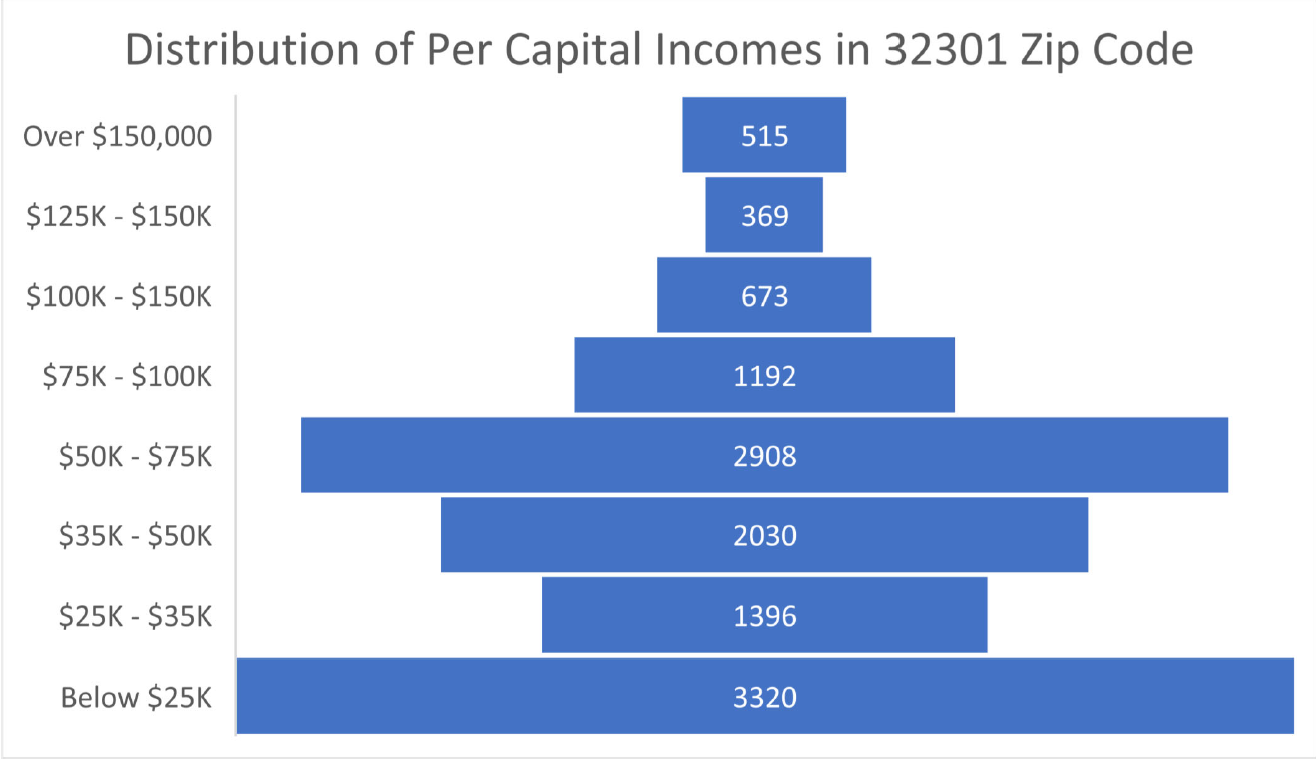 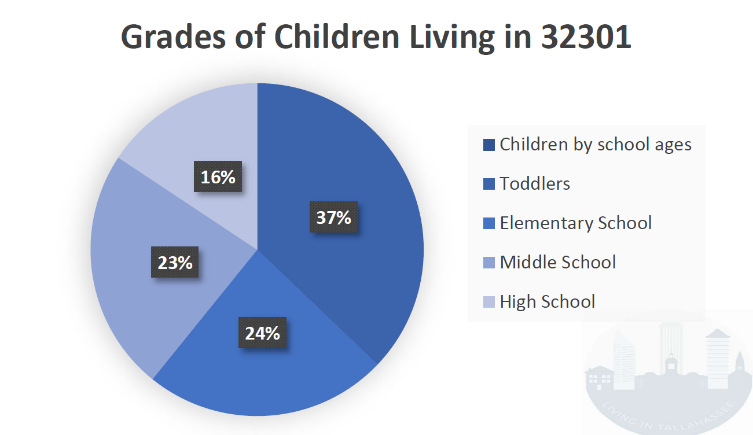 Approximately 22% of the households earn more than $75K a year.

This area is a Tallahassee adult night life. There are lots of condos with multi-use buildings near the Cascades Park. It has many quiet subdivisions off the Parkway. This area is very busy with many state offices, tourists, and when the state legislature is in session – it is even busier with staffers and legislators doing business downtown. There are many cool parks, museums, and things to see downtown.  Even if it is raining, you could spend an afternoon in the Capitol Complex exploring the historic and new capitol buildings.

Walkability scores are based on a scale from 1 to 100. The higher the number, the shorter the walk to needed amenities. Even though there are walkable areas, this zip code still lacks amenities within walking distance. Most of the homes are not within walking distance of grocery or household goods stores. The walkability score for Tallahassee’s 32301 zip code is a very respectable 2.5. If you have read other zip code pages, you know that this zip code has the highest walkability scores. Unfortunately, this still means that virtually everything will require a vehicle but there are sidewalks on most of the streets. The city has also made scooters available almost everywhere downtown. They can be rented through an app on your phone and costs are reasonable for an afternoon of transportation. 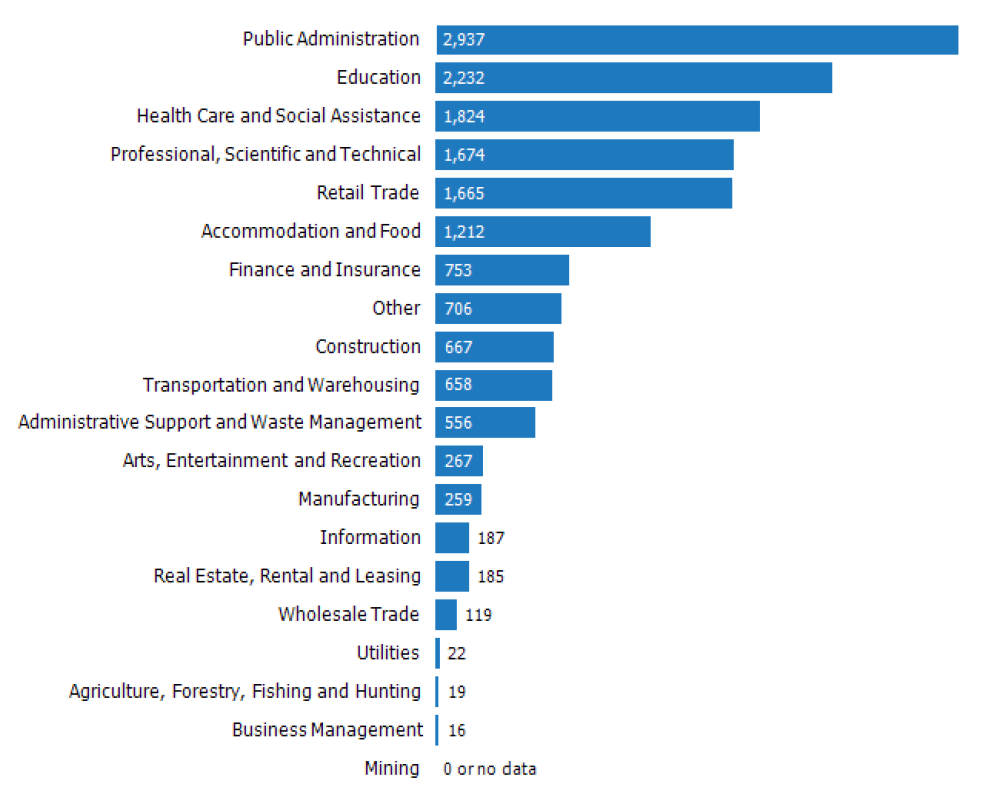 The list below does not include every single school zoned for this zip code, only the most common schools. Check what schools your potential residence is zoned for here: Leon County School Zones

Most homes in the Tallahassee 32301 zip code will be zoned for:

Most homes in the 32301 zip code will be zoned for one of the following middle schools:

If you want more information about Middle Schools, including reviews and grades, click here. You can look up your address to see what middle school you are zoned for here.

Most homes in Tallahassee’s 32301 zip code will be zone for one of the following high schools:

You can read more information about High Schools here. There are free reports to download that will provide you will more detail about the schools. You can look to see what high school your address is zoned for here.

The City of Tallahassee maintains several gorgeous parks downtown and throughout the zip code. These include: Cascades Park, Indian Head Park, Myers Park, Jacks McLean Park, Center and Pool. We have photos! They need to be formatted for the best visual appeal, though! Please check back!

This area has the highest AARP Livability index in Tallahassee at 55. Furthermore, its highest scores are for environment and transportation. The lowest score is for Health. This means access to prevention and quality care. The AARP Livability score was developed using survey data from adults over 50 years of age. They used this data to determine general preferences for community living. These included the preferences for physical ability, driving status, race, and housing amenities among many others. The livability scores range from 0 to 100. Find more information on their website here: AARP Livability Index – Location Results

Only 30% of the residents in Tallahassee’s 32301 zip code own their own homes. That means there are a lot of multi-family rentals in this area. The 32301 zip code has a median house age of 44 years old. There is very little new construction going on in this zip code.

Homes average about 88 days on the market before they are sold. It takes an average of 45 days to close a mortgage. This average of days on market is the highest in any Tallahassee zip code. This time on market is WAY longer than the average days on market for 2021. Last year, homes spent an average of 40 days on the market. The Tallahassee zip code of 32301 had 77 sales of single-family homes sold in the first five months of 2022. There were 245 homes sold in 2021. This may be the first indication that homes sales are slipping in Tallahassee.  Let’s see what the future trends show.

Many neighborhoods in the 32301 zip code have homes built in the mid-century from the 1940s to the 1960s.  Unfortunately, you will see little newly constructed single-family homes each year. The most common build year of the homes sold this year was 1949. This means, that most homes sold this year were around 70 years old. The average yard size was a little over a quarter of an acre at .28 acres. The lowest sold price in 2022 so far, was $35,000.

If you are thinking about buying a home, we would love to be your real estate expert on call.  If you find this information helpful – please let me know by reaching out to us through the contact us page.  Thanks for your help!