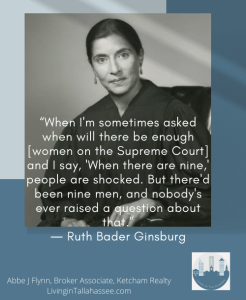 Today is Ruth Bader Ginsburg’s birthday. She would have been 89. It seems appropriate that her birth month is also National Women’s History Month. She was only the second woman appointed to the Supreme Court in 1984. I was 14 and I remember it very clearly.

My dad was sure that there were more qualified men to serve on the court than RBG. My mom quietly cheered though. She and I talked about how things were different for me than they were for her. That I had more choices than she did at my age.

She said that if I wanted to grow up to be president of the United States or a Justice on the Supreme Court, I just had to work harder than any man around me. She encouraged me that it wouldn’t be easy, but nothing of value comes easy.

I’m not sure I can say that I went on to study for my Ph.D. in Criminology because of the Notorious RBG, but I can say that she was a role model for me in a time there were few role models for women. From her court opinions to her books, she had a huge influence on me and many other GenX women trying to find our professional way in life.

“Fight for the things that you care about. But do it in a way that will lead others to join you.”

Is Tallahassee A Good Place To Live

Ask Us Any Question